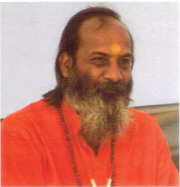 Swami Atmananda Puri is the foundation pillar of RGS Gurukulam. He is the man driving the ray of hope for the children and looks after the day to day activities and operations for the school. He has a vision to provide a modern fusion of Finnish and Indian style of education  to the not so privileged kids of  Dumka. He looks after the administration of the school and is working towards bringing the concept of ‘Gurukulam’ – which was one of the ancient and most efficient forms of education system that had its origin in India.

Swami Atmananda Puri was awarded with Socio Spiritual Worker award by the Govt of Jharkhand in October 2019. Read more about it here.