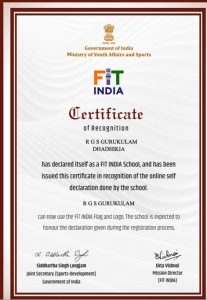 RGS Gurukulam, a unit of Shatan Ashram is such a school which caters the best education with pure Indian culture and with the style of Finland education system for the dropout kids. Located at Dumka, Jharkhand this school is like a ray of hope for lot of children from the adjoining areas. RGS Gurukulam provides first of its kind education with Finnish collaboration. Swamini Anuradha Puri is an eminent backbone to the future of this school. The school plans to grow at a much higher pace in the years to come.

The school is located just beside Shatan Ashram, which once used to be the abode of Sri Sri Jagadish Baba. Some of the unique aspects about RGS Gurukulam are:

RGS Gurukulam has been awarded with the FIT India Certificate in June 2021 from the Sport Ministry of Government of India. The FIT India certificate is an emblem of quality evaluated based on quality of teaching, course curriculum, and taking various other metrics into consideration. We are proud and honoured to get this recognition as we strive towards more excellence.

Have a look at the journey of RGS Gurukulam from the following link. It shows a video which takes you through the timeline right since it was still a dream to the day where it has blossomed to.